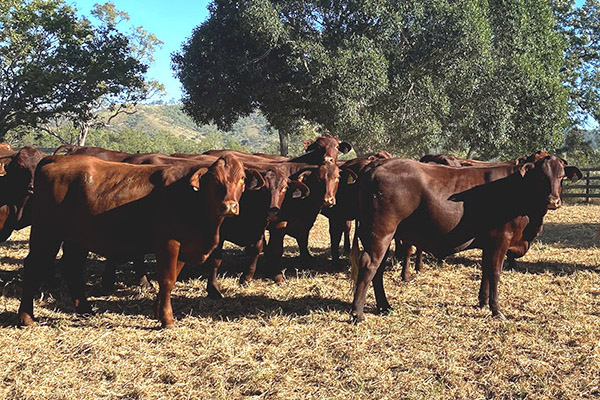 What is Single-Step BREEDPLAN?

Single-Step BREEDPLAN is new analysis software developed by AGBU, a joint venture of NSW Department of Primary Industries (NSW DPI) and the University of New England (UNE), funded by Meat and Livestock Australia Limited (MLA). The Single-Step BREEDPLAN analysis utilises pedigree, performance and genomic information simultaneously. The analysis takes account of each animal’s actual genetic relationship with all other genotyped animals, including those in the reference population. The reference population is the set of Australian Santa Gertrudis animals that have genotypes (SNP data) and phenotypes (performance records) for each particular trait. Currently the reference population for Australian Santa Gertrudis includes animals measured and genotyped in the CRC, along with animals genotyped and recorded in the Santa Gertrudis BIN program and current R&D projects (Repronomics) and several industry herds.

Overall, the most important effects of the implementation of Single-Step BREEDPLAN are that:

Prior to Single-Step, the evaluation used relationships between animals within Santa Gertrudis BREEDPLAN that were determined by the pedigree provided. For example, the evaluation modelled a genetic relationship between full siblings (i.e. animals with the same sire and dam) of 0.5. This means that full siblings are predicted to share on average 50% of their genes in common. Whereas in Single-Step BREEDPLAN, high density SNP genotypes are used to determine the actual degree of relationship between individuals. In the case of full siblings, their relationship may vary from 0.35 to 0.65 depending on the number of SNP they share in common. Similarly, while pedigree may indicate that two animals are unrelated, they may actually share common genes and if genotyped, they will have a genomic relationship greater than 0.

The Single-Step analysis relies on the construction of the genomic relationship matrix (GRM) for a given breed. Important to this step is ensuring the animals entering the evaluation are from the given breed. Therefore, as part of the genomic pipeline QA checking, the genomic breed composition of an individual is determined. The GRM is only constructed for those animals that are ≥80% related to the existing population of genotyped animals in the breed. The software also identifies possible discrepancies in the society recorded pedigrees for genotyped animals. Breeders will be notified of these discrepancies and encouraged to re-sample animals to ensure DNA integrity and in some cases, pedigrees may need to be corrected by the SGBAA.

Other Changes to the Santa Gertrudis Analysis

In addition to the implementation of the single step method, a Shear Force EBV will be switched on in the March Santa Gertrudis BREEDPLAN analysis.

Shear Force EBVs are estimates of genetic differences between animals in meat tenderness. Shear force is measured as the force required (in kilograms) to pull a mechanical blade through a piece of cooked meat. It is based upon direct carcase measurements recorded in research projects. Shear force EBVs are expressed in kg, with lower (more negative) EBVs predicting lower shear force i.e. more tender meat.

The March 2021 Santa Gertrudis BREEDPLAN analysis included a major upgrade. Single-Step software has been introduced, meaning that genomic information, along with pedigree and performance data, will now be used in the calculation of BREEDPLAN EBVs for Australian Santa Gertrudis animals. Additionally, Shear Force EBVs have also been made available.